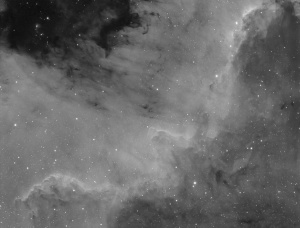 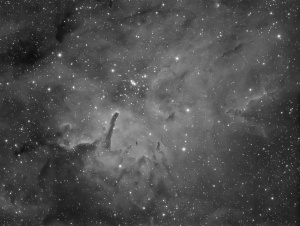 To explain… this time of year, high in the sky for most of the night are various emission nebulae that have loads of Hydrogen Alpha (Ha) emissions, at the far red end of the visible light spectrum.  Why, I hear you cry, is that a big deal?  Well, Ha is one of the emission bands that’s far less affected by the moon (or devil’s lantern as imagers like to call it 😉 ).  Faint objects, are, by definition, not bright.  The moon, when full, or near-full, most definitely is bright.  The full moon has the effect of effectively whitewashing (or should that be ‘bluish-washing’) the sky, absolutely wiping out the contrast in most wavelengths, and making imaging a fruitless exercise.

You can, of course, grab some subs before and/or after moon rise or set, but that very much cuts down the useful imaging time.  Alternatively, if you are using a mono camera to do the capture, you can capture in the very specific Ha band, which is very minimally affected by the moon, especially if you’re more than 30 degrees away from it in the sky.  Even closer than that, the effect is minimal.

This means that during these times of well-lit nighttime imaging hell, you can still go about your business of gathering the red bits, and then add to these by gathering the Oiii and/or Sii stuff when the moon goes away again later in the month.

This was one of the main reasons for me making the shift to mono CCD imaging from the world of one-shot colour DSLR.  I now have so much more in the way of nights to be able to image – as inevitably, the clearest nights coincide with the full moon.  Previously these would have been more or less useless…

The images in this post are of the North America Nebula wall region in Cygnus (no relation to Donald Trump’s less friendly earth-bound version), and NGC6820 – a reflection nebula, embedded in an emission nebula, in Vulpecula. The Wall is 5hrs 10mins of 5-min Ha subs and NGC6820 is a grand total of about 7.5hrs of 5-min Ha subs.

Quite an interesting contrast here.  The Wall is a fairly bright object (at least imaging-wise), which you can get a very good end-result in Ha at 2hrs.  NGC6820 is very much fainter, and at 2hrs I was getting very little in the way of faint detail.  After 7.5hrs though, it came into its own.

But why are they greyscale Adam???? I thought Ha was red???  Okay – this one is fairly straightforward.  The mono camera is sensitive to all wavelengths of visible light (and a bit either side – UV and IR), and records the intensity of these, but can’t distinguish the colour.  Therefore, when we stick the filter in front of the sensor, it’s still only recording the image in mono, but it’s only capturing the the one band in mono.  Therefore, when we show it on its own, it has to be shown in greyscale, or the stars themselves would also be red (look at the greyscale image through a red light gel or even a red sweet wrapper or something if you don’t believe me).   It’s only a temporary thing, as when you do the magic to map the Ha to the red part of the spectrum, then overlay the other band (usually Oiii in my case) in both Green and Blue, the overall image is transformed to a colour one, with white stars.  If the object is primarily giving out light in the Ha and Oiii bands, then this is often quite close to true colour – see my Veil Nebula images for an example of this.  You can also map the bands to other colours to get interesting false colour effects such as the ‘Hubble Palette’ (which I’ll go into another time – partly as it needs an SII filter to be done properly).

So – Why a project?  Well, now I can image the same object over several nights with relatively little difficulty, I start a project during one part of the month by imaging the Ha during the full moon, and then add the Oiii to make the full monty when I next get the chance at a slightly-less moon-invaded set of imaging nights.  I’ve imaged the Wall before, but with a wider view in the ED70 – https://www.astrosite.co.uk/north-america-nebula-in-cygnus-bi-colour-narrowband-13-10-18-14-10-18/.  This concentrates much more on the wall itself, and I think the early results in Ha are promising.  NGC6820 I’ve never imaged before, so that one is new to me.  Watch this space!

Capture and Processing Information - The Wall