Some Thoughts on Automation, and My Build of a Homebrew Stepper-Motor Auto-Focuser

In the latter part of 2018, I got to the point where I wanted to up my imaging game.  The main way I could do this was more data (i.e. more sub-frame exposures = more to stack = a better image to start with).  During the course of the previous 8 months or so, I’d already taken the leap from DSLR imaging to mono CCD-based capture using an ATIK 314L.  This was a revelation.  It was, however, a revelation that came with its own additional challenges.  The first of these was the main reason I’d avoided the jump to mono, and that was the necessary introduction of filters into my setup.  Unless you want to capture exclusively in visible light mono, or ‘Luminance’ as it’s called, then you need to use a range of different filters in your imaging train to enable you to capture the various wavelengths of light, which are then re-combined in post-processing to make up the image.  This means changing filters during the capture session. 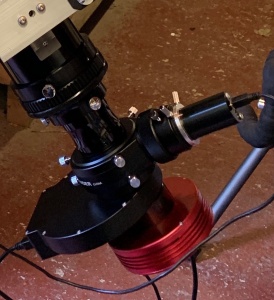 ZWO EFW in my Imaging Train

I soon discovered this is an absolute pain if you don’t have a filter wheel.  A filter wheel goes between the CCD and the telescope, and allows you to load it up with a selection of different filters, and swap these as and when necessary without having to remove the camera and change filters manually.  This has multiple benefits – speed of change, less chance of getting your filters or CCD dirty, having a much lower chance of having to refocus, not having to reframe following the change, etc etc.  I think you get the idea.    There are two major flavours of filter wheel – the manual type, which you turn, well, manually, and the USB type, which you turn via an ASCOM driver from your laptop.  The former is good.  The latter is heavenly.

I opted for the latter with one thing in mind – automation.  I have a ZWO EFW 8-position USB filter wheel, currently loaded with Luminance, Red, Green, Blue, OIII, Ha and CLS filters, with an additional space ready for the SII when I get around to it.  Once loaded into the wheel, these can be swapped in and out of the imaging train at will, or filter swaps can integrated into a capture sequence via capture software.  My current weapon of choice for capture is SGP (Sequence Generator Pro) by Main Sequence Software (http://mainsequencesoftware.com/products/sgpro).

My main remaining issue was that of focus.  Focusing the scope correctly is absolutely paramount for getting decent images.  Focusing is also an extremely labour-intensive (so to speak) part of the whole capture routine.  It’s the one place where you have to manually intervene throughout the capture sequence, as every time a filter is changed, or the temperature varies more than a couple of degrees, the scope requires refocusing to keep those stars pinpoint sharp, especially with the less expensive doublet scopes that I use for imaging, which don’t focus each wavelength of light perfectly at the same point.  This means keeping capture sequences to just one or two filters a night, or staying up all night to babysit the process, and refocus every time you change filters etc.  I’m now in my 40s with kids, and staying up on an all-nighter, at least regularly, isn’t something that comes quite as naturally anymore :).   How to solve this?  An Autofocuser, that’s how….

An autofocuser is a piece of kit that attaches to your telescope’s focus knob.  It’s usually based around a stepper motor, and allows movement of the focuser in extremely accurate and tiny steps from your capture PC.  Link this into software such as SGP, and you have a system that takes a shot, checks focus, moves the focuser, takes a shot, checks focus etc, until it figures out the point of best focus, then finishes by returning to that point, with your image (generally) in pretty-much perfect focus.

The main issue with autofocusers is they are definitely not cheap.  There are many available on the market, of varying quality and price.  The very cheap focus motors you can buy (sub £50) are not stepper-motor based, and generally use a simple DC motor linked to a battery-powered handset, which enables you to go in, out and change the speed.  They also generally don’t link to USB, and don’t provide the accuracy required to perform auto-focus form a PC even if they do.  The more capable, which are based around a stepper motor, generally cost £250 upwards, and although very good, the price put me off.

So… let me introduce you to the myFocuserPro2 project.

This is an open-source Arduino-nano-based motorised focuser project, based around readily available components as well as a cheap (4 for £8 last time I bought some) Clone Arduino Nano microprocessor board, a DRV8825 stepper driver and a Nema 17 Planetary Geared stepper motor.

Due to the fact that this project is constantly updated, and the above Sourceforge site is by far the best source of current information about it, then I won’t try and repeat everything here, as that would be well and truly reinventing the wheel.  I’d say this project is of medium difficulty for most.  It doesn’t require a massive amount of electronics knowledge, as its kind of mapped out for you, but there are multiple ways of doing the same thing – some harder than others, so a few tips…

I housed the whole lot in a pair of project boxes that I sourced from good old Maplin (RIP) just before it went under.  However, these are easy to get on eBay or elsewhere.

This project has been fascinating for me as it’s presented numerous challenges. I’ve had to overcome.  Firstly I’ve had to learn Arduino from the ground up.  It’s not too hard to get to the point where you have enough knowledge to do what you need to do for this project  (basically get some libraries installed and upload the relevant code to the Arduino via USB).  However, I’ve also learnt a lot about Arduino on the side, which as been really interesting.

Secondly, I’ve had to overcome the physical issues around getting the thing attached to my telescopes.  The worst issue I encountered here was the fact the several of the bolts on my Altair 102ED scope were cross-threaded (from the factory too!), meaning I ended up having to drill them out and re-tap the holes to attach the bracket.  Not impossible, but a bit of a faff.

The whole lot interfaces with your software via good old ASCOM.  The ASCOM driver is of course available on the sourceforge site, along with a small utility to connect to and play with the focuser.  The Arduino itself is detected as a USB serial interface, so all of the comms is actually serial-based, and is done via a comms port on the PC.  The ASCOM focuser is picked up by both SGP and APT with absolutely no issues, and works flawlessly.

The sum total of all this work was that I now have a setup that I can set going in the evening, and leave overnight to carry out an entire capture sequence, including changing filters, refocusing, and even meridian flip (via SGP), followed by parking the scope.  I’ve captured some of my best images this way, as I can now get far more integration, and over several nights on the same object.  I’ve managed about 14hrs on a single object over a few nights this way.  So far the auto focus hasn’t failed me.

So to conclude, here’s gallery of images from the build process, which will hopefully provide some idea of what’s involved.