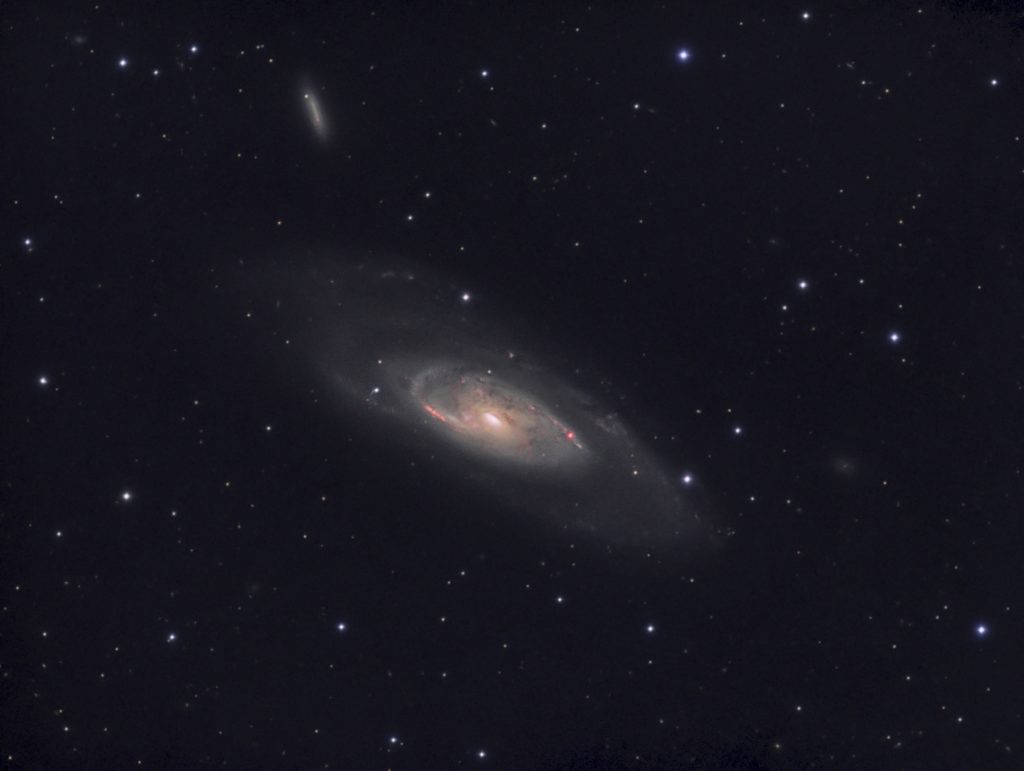 The latest in my series of ‘captured a few months ago, only got around to posting them now’ images, this is my take on M106, the ‘Splendid Galaxy’. This is a galaxy that has a name that always makes me smile

– I just imagine an C18th astronomer sitting there with a monocle on, saying ‘what shall I call this splendid object that I have just stumbled upon? – ah yes!’. There are a few other galaxies in this pic too, the most obvious of which is to the top left, and is NGC4248.  This is quite a difficult object to process, and the conditions for capture weren’t great for few nights over which the data was captured. Seeing in particular on the last night was absolutely diabolical (probably one of the worst I’ve ever seen!).

However, capture it I did…! A bit of a pain to process this one, not sure why – I think probably due to the balance between bringing the lovely big halo out (which is basically invisible in the individual subs), and keeping the noise down.  This was partly surprising as it’s turned out that the total integration (exposure) for this image is actually 14hrs and 15min!  At time of writing, that’s by far the largest amount of data I’ve captured on a single object.   This should, in theory, make it easier to process.  Hmmm….

This image is an example of the the kind of madness that ensues when you get your head into imaging. I spent about another hour just sorting out the core.  I wasn’t happy that the Ha was coming through so much near the core, making the entire central area pink, as it seems that’s not a true representation.  So… I reprocessed to re-mix the channels, leaving the core better (in my opinion anyway!), and now I think it looks more natural, with a more golden glow.  This is one aspect of astrophotography that takes a while to get your head around; i.e. very often, you’ll see multiple images of the same object, but multiple different people, and depending on the processing, certain aspects will be enhanced and/or prioritised by some people depending on personal taste and aesthetic judgement.  Also, so the quality and amount of each channel that’s captured, and the way they’re mixed, can have an effect on the outcome.

Sometimes it’s that last 5% that makes all the difference – either good or bad…!