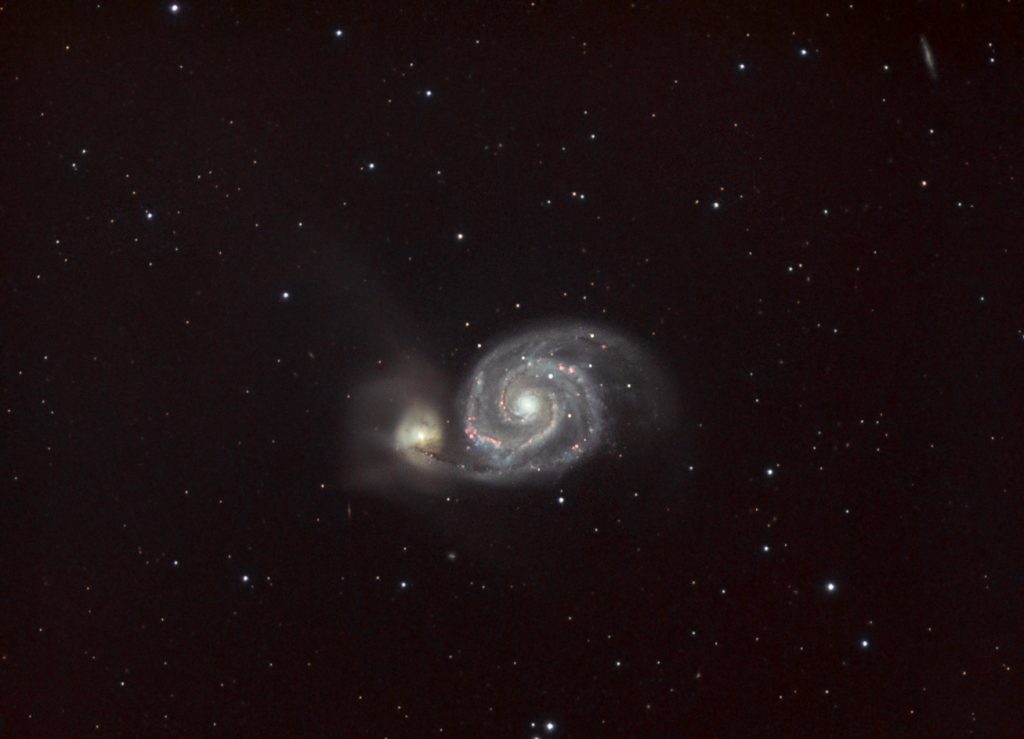 Another image captured a while back, but only now posted, this is an LRGB (Luminance, Red, Green, Blue) image of M51 – the Whirlpool Galaxy in Canes Venatici.

It consists of 1hr each of Red, Green and Blue, and 2hrs of Hydrogen Alpha – all in 5min subs, along with 2hrs of Luminance taken through a CLS filter.  It was taken across several nights in March 2019 (spread across about two weeks!), and from several different locations. It was stacked and put through DDP (digital development), along with RGB combination in MaximDL. It was then exported to Photoshop CC 2018, combined with the Luminance, and the was Ha added into the red channel to bring out the lovely H2 regions (the little red dots on the galaxy – areas of high star formation – stellar nurseries). As Susan, lots of other fiddling and tweaking was followed by export to Lightroom CC Classic for the final touches. 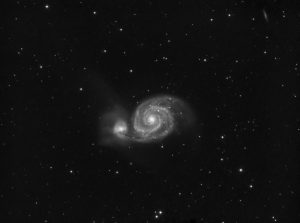 It was captured with the Atik 314L Mono, through the Altair 102ED at f/7 using Astronomik 12nm Ha, Astronomik RGB, and Altair CLS Filters. Mounted on HEQ5 and guided via OAG with SX Lodestar guide cam.   The initial capture was actually the luminance data, which I actually love all on it’s own.  The colour is really worth going for in this case, but I’ve included this mono luminance image to show that sometimes it’s really worth the effort of capturing that first, as it stands alone even if you don’t manage to add the colour data until a later time.

I particularly love this galaxy.  It’s one of the classic ‘Galaxy’ galaxies (if you see what I mean!).  The smaller portion off to the left is actually a totally separate galaxy that has collided with the main one, going sort of ‘into’ the plane of the image, and it’s actually the smaller one that’s pulling off material from the main spiral.  This process is very slow, taking place over millions of years, but eventually, the two galaxies will merge to form one giant elliptical galaxy with no real noticeable structure.

As usual I’ve included the detailed capture info below.