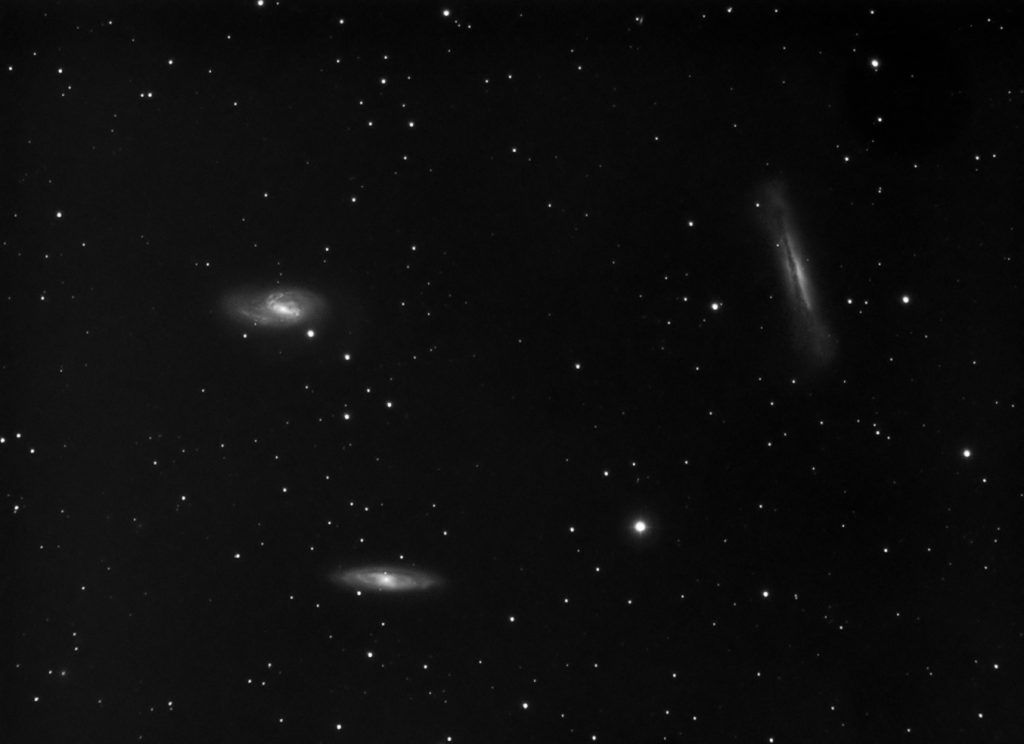 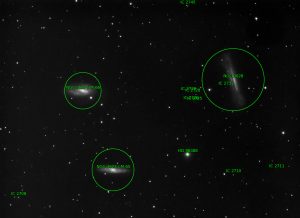 This is a mono capture the Leo Trio of galaxies.  People refer to it as the Leo Triplet, but I prefer the way Leo Trio rolls off the tongue…! It’s captured with the Atik 314L on my Ikharos f/6 ED70 doublet, mounted on the HEQ5, and guided by PHD via an SX Lodestar in the back of an Altair Astro 10×60 Finder Guider (in a side-by-side configuration).  An Altair Astro CLS-CCD filter was used to cut out some sky glow and light pollution.  There’s a total of around 1hr50min of 5-minute subs, captured with APT, and stacked in MaximDL.   Initial processing was done in Maxim, using the Digital Development function, with further post-processing in Photoshop CC and Lightroom CC.

I’m really pleased with the detail I managed to pull out of this little group – this is the first time I’ve captured it.  I’m using the Altair CLS-CCD filter partly to combat sky glow and LP, but also, it seems to work well as a minus violet/fringe killer-type filter too.  Lower-end doublets, like the one I’m using here have an issue with colour correction, which in essence means that the three primary colours don’t focus at exactly the same point.  This has the effect of causing blue ‘fringing’ on images, especially around brighter stars, which on a mono CCD, shows up as bloated stars.  It also acts as an IR-Cut filter.  Infra Red light, if left unchecked, also causes stars on a mono CCD to bloat.  It’s difficult to get the nice pin sharp stars that make a good deep sky image when you have star bloating on your original image.