One thing I’ve always found fascinating about astronomy is the fact you’re looking at the universe as it is (or as it was when the light left whatever you’re currently looking at anyway!).  The photons hitting your retina are the same photons that left whatever object it is you’re looking at.  Another thing is that the universe is dynamic.  Although many objects don’t visibly change during a lifetime, others change over the course of years, months, days or even minutes.  A case in point is the visual change over time of Saturn’s rings when observed from earth.  Every 13-16 years, we cross the ring plane of Saturn, which causes the rings to more or less disappear.  In between those crossings, they gradually open and close. 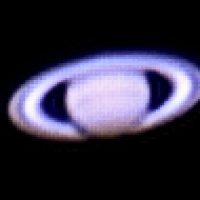 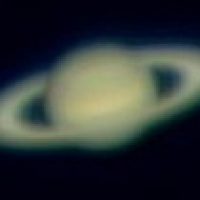 This is due to saturn being tilted in relation to the earth.  As we both go around the Sun, we’re seeing saturn from different angles as we go.

Neither of these images are the best quality (conditions weren’t good for either), but they clearly show the change in position of the rings.  Saturn is a planet I really want to capture at its best when I get the opportunity, but that’s yet to happen…