Mars November 2020 – Not Long After Opposition

Glad to finally be able to show my first planetary images in a few years.  The last few years have been a mix of bad placement, mixed with terrible seeing, a poor IR filter, and topped off by the mouldy cherry of a dodgy collimation on my LX90ACF.

I decided to go all out and try and swap everything but the camera.  To this end I cracked out the old faithful 8″ f/6 Newt, which, whilst looking comically large on the HEQ5, actually ended up giving mer far better results.  Combine this with the substitution of the cheap IR/UV cut filter I was using (which gave me a terrible orangey/red colour cast) with an Astronomik Luminance filter, and a bit of luck with the jet stream placement, and I came out with the following… 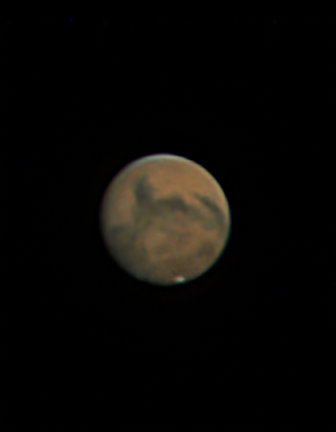 This is Mars, showing itself off on November 7th 2020 – about month after closest approach to us on October 6th, and was the first serious opportunity I had where the jet stream wasn’t parked stubbornly above the UK, messing up our seeing.  This is far and away the best image of Mars I’ve ever captured.  There are some great details here. Firstly, you can clearly see the variations in the martian surface, with identifiable features such as Syrtis Major, the darker area left of centre that sticks out above the rest. The Northern tip of Syrtis Major is where the Perseverance Rover that’s currently heading towards Mars will land in February 2021.

You can also see the Southern polar ice cap, and what’s known as the Northern Hood on the North Pole, showing as a thin light strip.  Both of these consist primarily of frozen carbon dioxide.
A bit more detail on the capture… 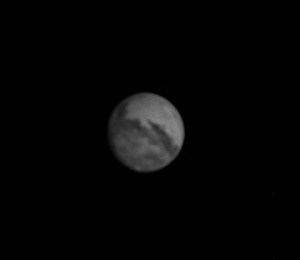 I also captured mars two days later using basically the same setup as above, but this time using an Astronomik IR Pass filter instead.  This allows ONLY infra red light through to the camera (which is actually very sensitive to IR).  Generally you need to exclude the IR from colour captures as it focuses slightly differently so will end up blurring your colour capture.  This alternative way gets rid of all the other colours and restricts it to only IR.   In theory, the effects of bad astronomical seeing (i.e. the stability of the air) can be partly counteracted by using an IR pass filter, as IR doesn’t get affected as much by bad seeing as visible light.  It did an admirable job here, as the colour captures I tried on the same night were unusable.  This was down to the jet stream being right over the UK at the time, causing the air to be turbulent.  I include it here as it shows well the usefulness of IR captures for planetary work.  It also clearly shows the rotation of the planet.  Mars’s day is slightly longer than ours, at 24hrs and 37min, so capturing at the same time a few days later means you see a slightly different view as it’s rotated a bit more than we have so to speak.

Glad to be back in the planetary capture game, though the opportunities will be limited until about 2027, as the planets aren’t well placed form the UK until then, so we have to grab the chances when they become available :).