The past few years have brought a slew of ‘comet of the century’ predictions, only to have them fizzle out, or break up on their journey around the sun before they had a chance to really show off their stuff.  Comets bearing the names Lovejoy, ISON, Panstarrs to name but a few failed to live up to expectations.   The last really good cometary apparition was C/2006 P1 McNaught back in 2007, and the last absolutely spectacular display being the infamous comet Hale-Bopp back in 1997, which was naked-eye visible through the night with an amazing double tail for several months.

When it was predicted the Comet C/2020 F3 (Neowise) – (Which I’ll call Neowise from now on, as thats a lot of typing every time), could brighten significantly, it was met with a cynical ‘I’ll believe it when I see it’ attitude by most astronomers and imagers.  Luckily, we got a cometary showoff that didn’t fail to impress for once.

Neowise (the comet) was discovered on March 27th 2020, by NEOWISE, the new name for the Wide-field Infrared Survey Explorer (WISE) mission after it had been repurposed for astroid-hunting following completion of it’s primary mission. It rapidly brightened, and by July, was visible earlier and earlier, rising out of the dawn light in the Northern Hemisphere as the weeks went by.  I decided to try my luck at capturing it in two different ways.  Firstly, I wanted a nice close-up pure astro-image shot (my primary goal), and secondly, I really wanted to show it in context over a landscape or seascape of some kind.  Turns out the primary goal became vey much the less important one, with the secondary having the far more satisfying outcome.

On 11th July 2020 at around 1am, I took a drive to Reculver, a Roman fortress situated on the North Coast of Kent, not far from Canterbury.  Not much remains of the Roman side of the place, but there are a lovely set of towers that originally formed the front of a 12th century medieval church (now in ruins) on the site. These, with the seascape in the background, form a wonderful foreground for the right shot, and in this case, Neowise was hanging right over the towers.  An 8-second exposure at ISO800 with my Fujifilm XT-1 with my 18-55mm lens at f/3.6 gave a spectacular view of proceedings… 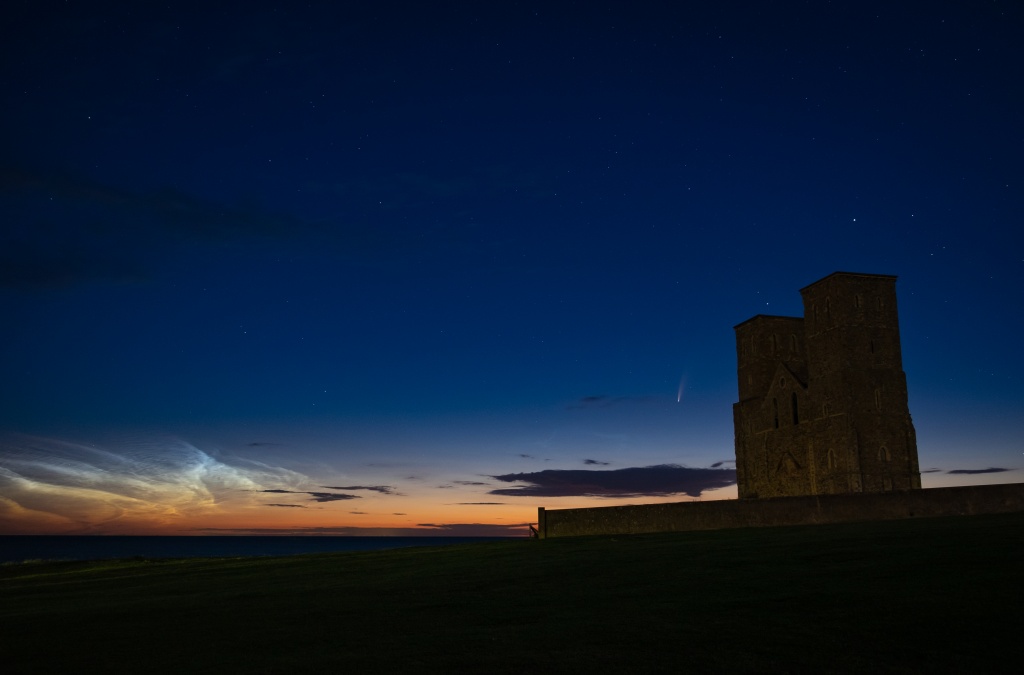 The best thing about this is the fact that, as well as the fantastic view of the comet, we were also incredibly lucky to be treated to a display of noctilucent clouds.  The whitish clouds to the left of the image are not normal clouds (which appear as normal black-looking patches elsewhere in the image), but are caused by ice crystals, incredibly high in the atmosphere, that get lit by the sun even though it’s below the horizon.  In fact, the orange glow on the horizon in the picture wasn’t actually visible to the naked eye – it’s been brought out by the long exposure.  To the naked eye initially, I thought the noctilucents were light pollution!

I captured the clouds separately, as I’d not actually ever seen a display before… 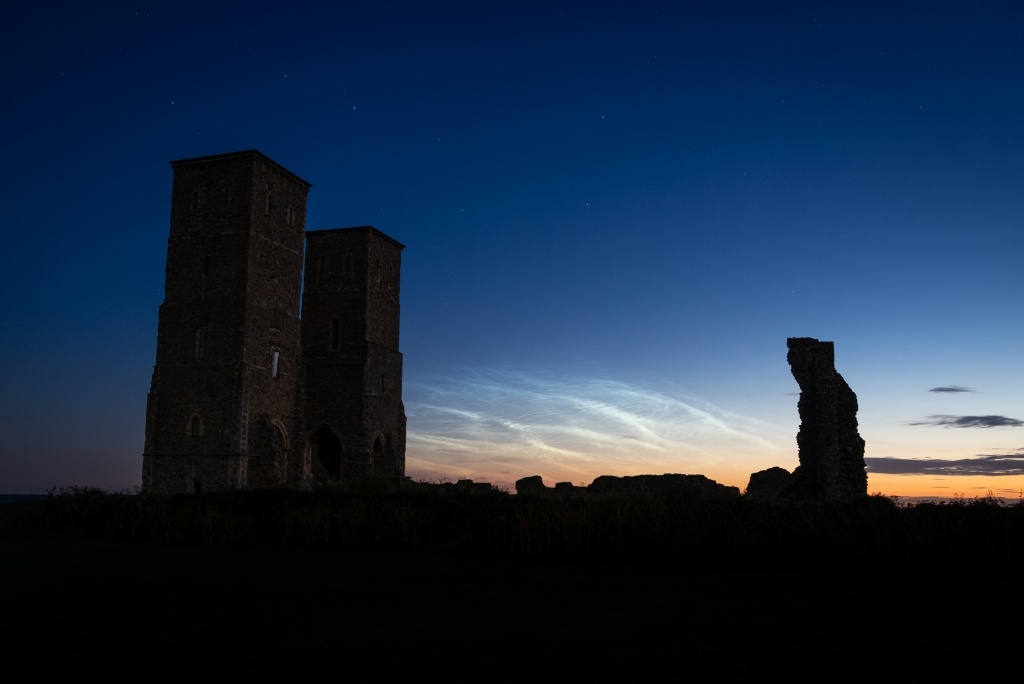 To finish off, I captured another image of the comet and the towers, this time, a little more cropped at 40mm… 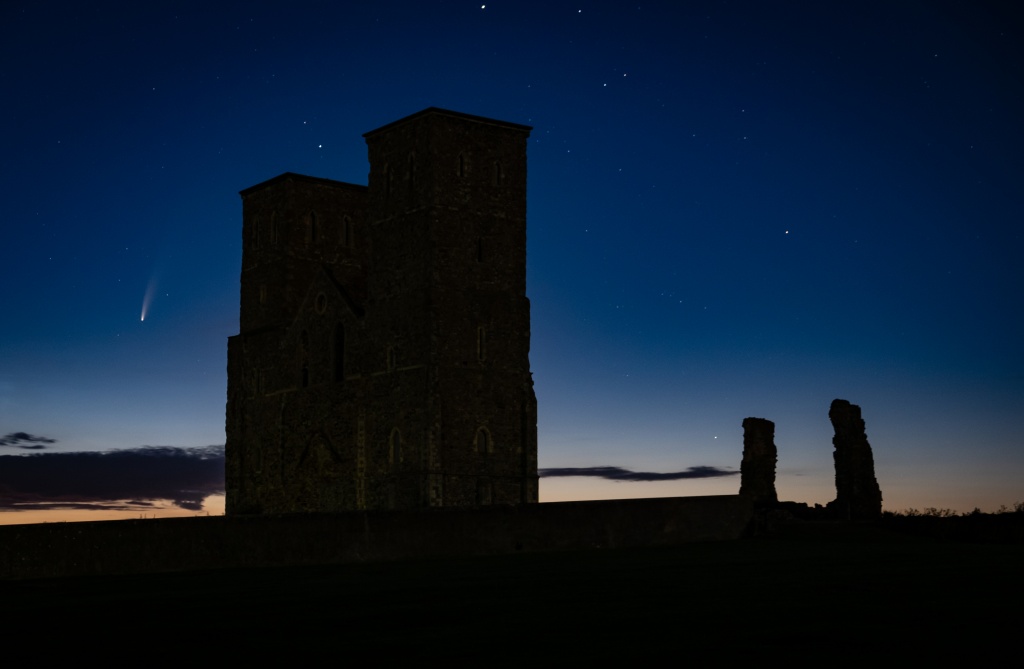 The whole thing was a magical experience, and I was not alone – there were a good selection of other astro-imagers separately there too, capturing the same moment.  It was lovely to go home mission accomplished (i.e. photographing the comet in context), and I was very pleased with the results.

A few days later, the clouds cleared again, and I managed to capture a close-up shot.  This was not the image I was hoping for, but still shows the comet fairly well, including the primary dust tail, as well as the fainter (certainly in this shot!) slightly bluer ion tail on the left.  It is a single shot, and was taken on the XT-1 at 4 seconds exposure at ISO 1600, with a 200mm lens at f/4.8.  I attempted a stack of a set of these, but for some reason, didn’t have any luck getting anything decent out of the other end, so settled for this single image. 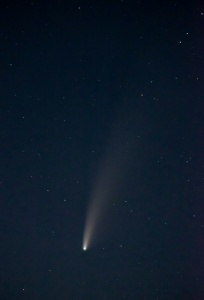 Overall, this was something different for me.  The experience of being at Reculver in the wee hours of the morning, capturing that amazing scene will stay with me forever.  It’s not often that the scene to the naked eye looks as spectacular as the one captured by the sensor, but in this case, it was very much an exception.