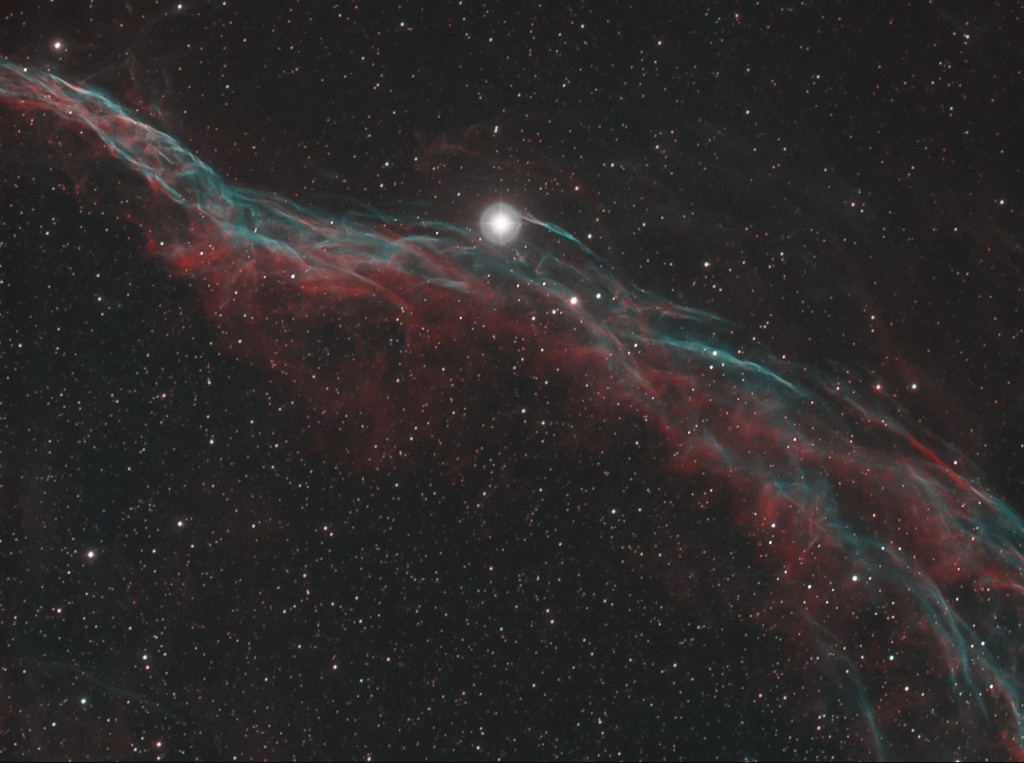 I love the late summer nights – lots of lovely nebulosity to capture, with Cygnus high in the sky for most of the night.  This is a new image, taken last night at time of writing (25th/26th August) of my old friend NGC 6960, the Western Veil Nebula (or Witch’s Broom), a diffuse nebula in Cygnus. A favourite of many an astronomer and imager, this supernova remnant has absolutely incredible structure in both OIII and Ha, but some nice clear demarkation between the two enables a lovely dual narrowband image. I’ve gone for a closer crop with the 102ED, as I wanted to see some off the detail in it rather than taking an overall view that is the most common way of doing this.

It’s part of a larger complex of whispy structures that are what’s left of when a star about 20 times the mass of the sun went bang about 8000 years ago. The full complex covers an area in the sky of about three degrees, or six times the width of the full moon!

This image consists of a total of five hours of 5-minute sub-frames, made up of three hours of Hydrogen Alpha (Ha) and two hours of Oxygen III (OIII). As a point of interest, I think this is the first time I’ve ever done an imaging run of that sort of length, and every single frame of the whole five hours was usable.  I didn’t reject a single frame when I went through them afterwards…!

Similar to my recently posted M27, I’ve gone for the slightly more ‘natural’ look by producing a near real-colour image by using Ha as the red, and OIII equally for the blue and green. I’ve then also added the Ha as a false luminance layer to bring out some of the fainter detail that’s present around the main nebula – if you look carefully, the whole field of view is packed with faint nebulosity.

This object is an excellent example of how targets can vary widely in each band when capturing narrowband.  I’ve included the mono stacked and stretched images below to show how they look prior to combination into a colour image.  As you can see, although the general shape is of course similar, the actual parts of the gaseous clouds captured in each band is more or less completely different… 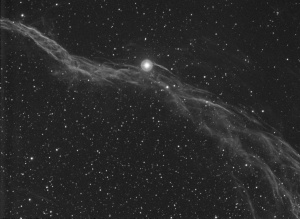 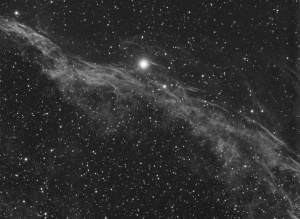 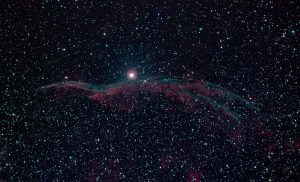 I also captured this target back in about 2015 using a Canon 1100D DSLR.  I include it here as it shows how the dual narrowband image, once processed, actually matches up to the real-colour RGB image very well. I’d go so far as to say that this is probably much closer to the real colours, as the processing on the DSLR image was a bit ropey, and ended up a bit cyan.  I’d also like to think it also shows how far I’ve come with imaging! DSLRs are a fantastic entry point into astronomical imaging, but do come with their own challenges – primarily the sensors are far noisier than the cooled sensor of an astronomical CCD or CMOS camera, but also that you are really restricted to capturing in RGB, with the delights of narrowband imaging not really accessible due to technical limitations with a standard DSLR sensor.