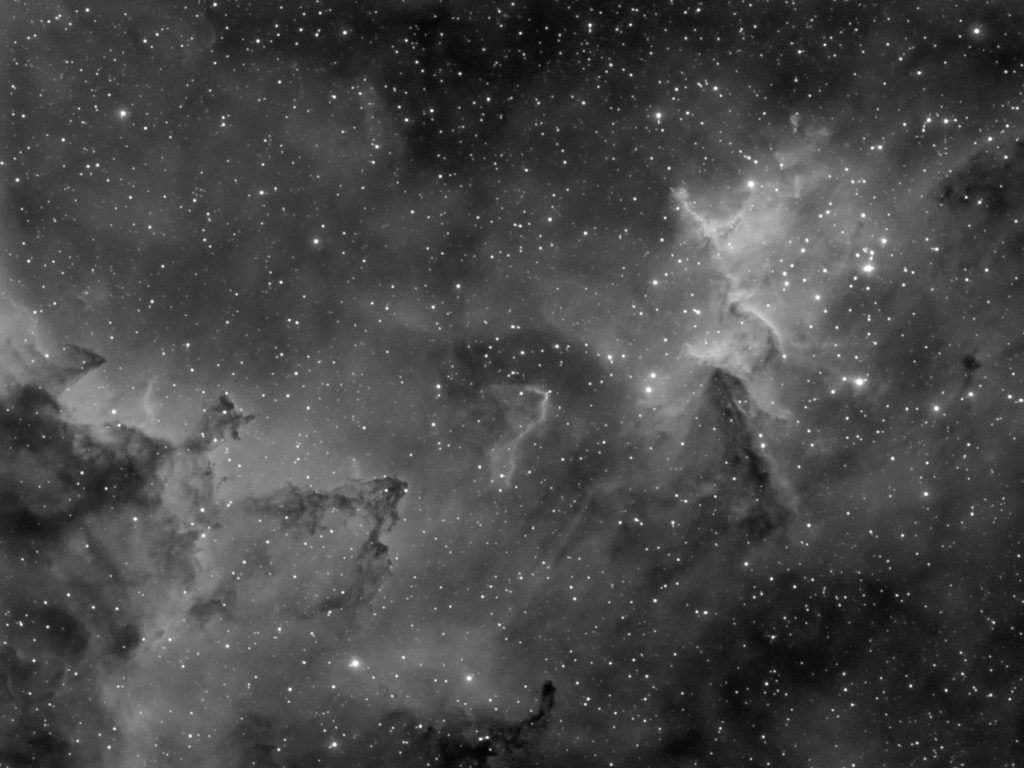 Heart of the Heart in Hydrogen Alpha 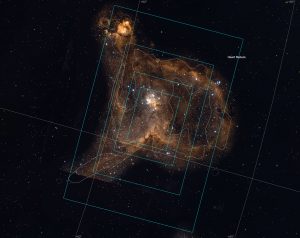 The chip of the Canon EOS 1100D is APS-C sized, which is 36 x 24mm, whereas the Atik 314L chip, a Sony ICX285AL ExView, is a mere 8.98 x 6.71mm.  This means the area of sky that you can capture (the Field of View or FOV) for a given scope is far, far smaller.  To get an idea, I’ve included a screenshot of SkySafari to the left, doing what it does very well, and showing me the field of view of not only two scopes with there Atik, but also, temporarily, with the 1100D. Note that none of these are reduced either, so this is native field of view.  The inner two oblongs are the field of view of the Atik 314L on my Altair 102ED and my Ikharos ED70 respectively.  As you can probably see, the inner one (the 102ED), matches quite nicely with the framing of the image at the top of this article, as that’s basically what it is!  The two outer oblongs are the same scopes, but showing the FOV of the 1100D instead.  As you can clearly see, the 1100D’s chip is massive compared to the Atik. 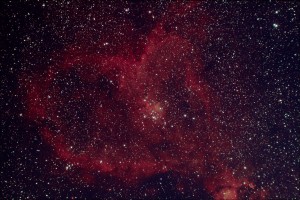 Out of interest, also included here is an old (noisy) capture I did of the heart nebula back in 2014, through an 80mm Revelation refractor, which has a FOV not too far off the ED70.  Again, as you can see, it more-or-less matches the FOV shown in Skysafari.

Initially, In my head, this was immediately a negative.  I mourned the fact that although the chip was gloriously sensitive and low noise, I would be confined to small nebulae, galaxies and globs – stuff I could get on the chip.

Well… how wrong I was!  What I didn’t think about was the fact that I could now home in on the detail in these lovely big objects.  Up until that point, I’d never really thought about imaging the details to be found within nebulae, only really seeing them as a whole. The image at the top of this article is of the heart of the Heart Nebula – IC1805.  The detail to be found there is absolutely astounding.  It’s detail that hardly even showed up on my original DSLR capture of the same object.  Capturing the same area in Hydrogen Alpha, and at much closer quarters, the astounding detail is revealed.  The wispy dark tendrils, the subtle gradients, the structure of the individual parts of the clouds – all can now be seen clearly.

This image gave me my first real taste of what the confines of the small chip can end up revealing.  Moral of the story?  Don’t see the negatives in your kit – simply rethink the positives to fit!  Again, I’ll be revisiting this in the near future to add OIII data to the mix, and hopefully bring out even more.  As for the details?  Well… it was captured with the Altair 102ED, and is 4hrs of Ha before the clouds rolled in.