Let me start by saying this is one of my favourite objects in the entire sky.  Its one target that I’d never actually been able to see, and hence became one of my first ever targets for testing my astro-imaging setup.  Seeing this on the image preview after the first shot I took was definitely one of those ‘WOW’ moments that astronomy dishes up from time to time.  The main image here is the final version of my first ‘proper’ attempt at it back in April 2013.  It was taken from the Paddock, which is the dark sky site for SEKAS.  It consists of a total of 13 minutes of 1-minute exposures at ISO1600, using the Skywatcher 200P f6 Newt, mounted on the HEQ5.  It was unguided – I hadn’t got into the dark art of guiding by then. If you look carefully you can see a small galaxy, IC4263, in the lower left.

Just for old time’s sake, here’s the first image I took of this object.  It’s a single 30s exposure of M51 that I took on one of the first nights I had the DSLR attached to the scope.  It doesn’t look like much now, but it knocked my socks off when I saw it appear on that DSLR screen…!  Alongside it is the second time I tried, this time with about a minute’s exposure – still a single sub, but showing a little more detail.  I love it when my progress on an object is so trackable – lets me see how far I’ve come with it, but also how far I have still to go…! 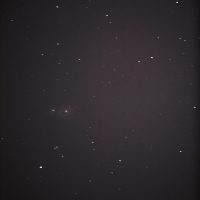 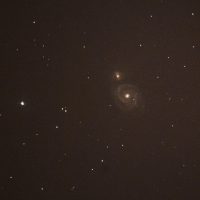