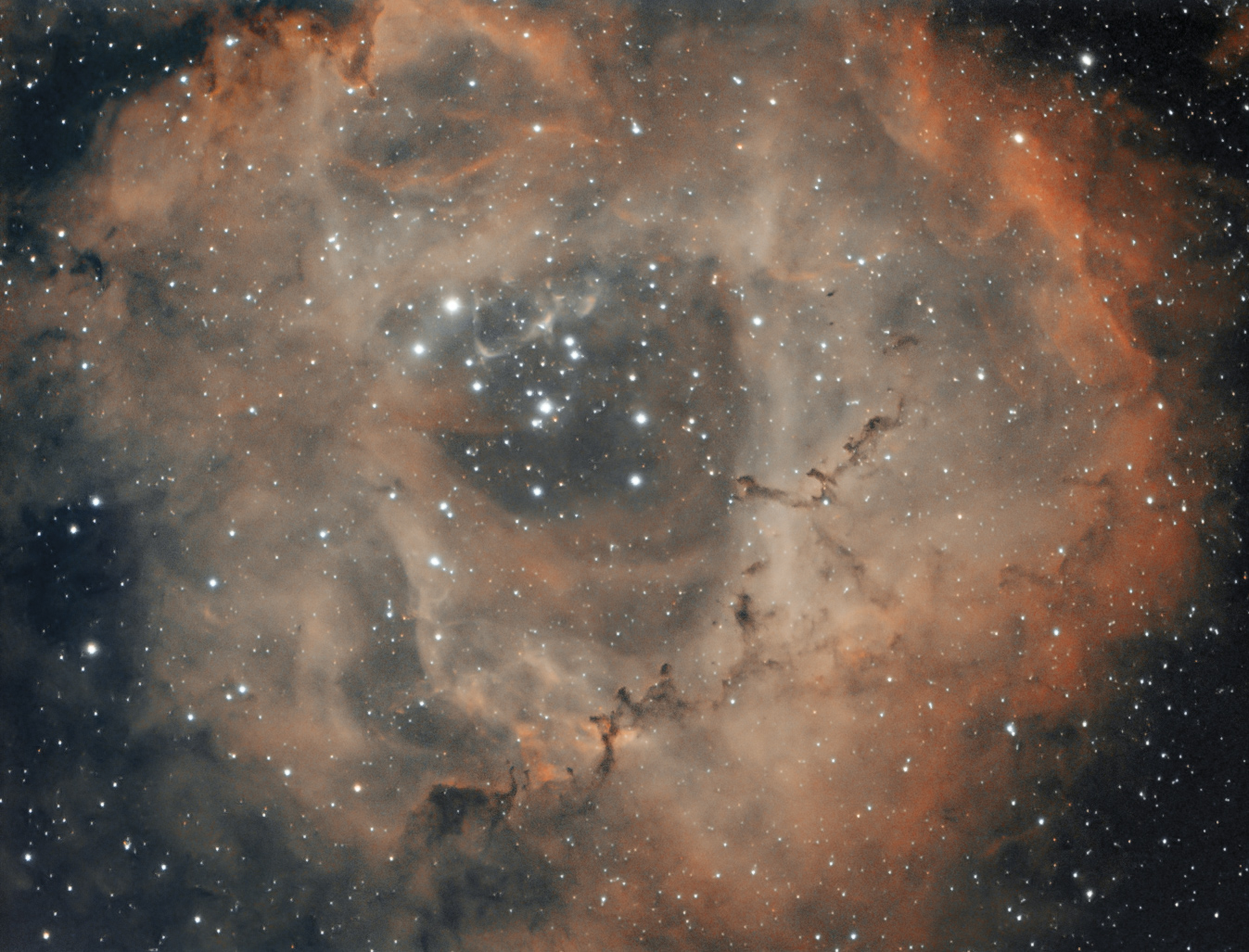 A return this last month to an old favourite – Caldwell 49 – The Rosette Nebula in Monoceros.  This is an object I’ve imaged in dual-colour narrowband before, but using a different palette, and a smaller field of view.  This version used my smaller ED70 scope with it’s wider field of view, to take in a larger, more general view of the main object.   Incidentally, a bit of trivia… ‘Caldwell’ was the first half of Sir Patrick Caldwell-Moore’s actual double-barrel surname, which he obviously shortened in day to day use.  Patrick put his own ‘Caldwell Catalogue’ together as a list of good objects to observe for amateur astronomers.  This one is definitely one of the harder ones to spot on his list – it’s faintly visible with an Oiii filter, with a larger (10”+) aperture scope. It’s quite big – around 4-5 times the width of the full moon!

This image was taken over about three or four rather variable nights, and is a dual-colour narrowband image, with about 2hrs 45mins of 5-minute Hydrogen Alpha subs, and three hours of 10-minute OIII subs.  Lost a lot due to it being quite low in the sky quite early at this time of year, and so many of the shots taken later on weren’t usable due to light pollution and low haze.  Once the bad ones were weeded out, the rest were stacked in MaximDL, one stack for each of Oiii and Ha.

Once stacked and the initial stretch done, the Ha and OIII mono images look like this… 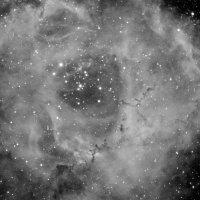 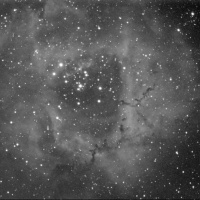 The resultant mono images then get combined into a colour image by mapping the Ha image to the red channel, the OIII image to the green channel, and having a mix of the two for the blue channel.  I balanced the colours in this case to try and get a fairly natural looking result, but one that really made the detail pop as much as possible.

Once the colours were combined, then off to Photoshop it went for further processing.  In photoshop I added the Ha back in again as a luminance layer.  This helps the detail again, as the Ha is the channel where there is usually more detail to play with, so that helps add it back in without doing. Much to the overall colour balance apart from having to boost the saturation a bit (as it tends to was the colour out a little).  I then worked on bringing out the detail of each part, whilst controlling the noise.  A big part of processing deep-sky images is bringing out the detail that’s hidden.  The problem is, the more detail you push to bring out, the more the noise becomes evident, so you have to balance the two – enough detail, without too much noise.  I then import it into Lightroom.  Lightroom is a tool very under-used by astro-imagers in my opinion.  It is very good in that it allows a very ‘instant feedback’ route for finishing off images, and can turn a good image into a great one.  There are tool on there that are designed for enhancing general photos that can serve a very different purpose for astro images.

I like the way this one has turned out, as I was going for the natural look – again I’m not a big fan of the over-saturated images that get produce by some imagers – I’d prefer it’s dialled back slightly to retain some semblance of reality.  In the end, this is a false-colour image, but I’d prefer those that don’t know that to look at it and see something natural and beautiful in itself, rather than an over-cooked mess.

Here are the gory details…