Here is a lunar image I captured using my Starwave 102ED, and the Canon 1100D on 6th May.  This shot is unusual in that it shows two optical illusions that only appear for a few hours each month.  The Werner (or Lunar) X, and the Lunar V, are patterns that appear when the raking sunlight hits the top of various features on the lunar surface, in what’s known as a ‘clair-obscur’ effect.

If you look carefully, you can see, about three quarters of the way down the terminator (the light/dark boundary), there is an ‘X’ shape.  This is of course, not real as such, it appears like this due to the sunlight hitting a certain set of crater walls and peaks.  A few hours later this effect disappears totally.  The same can be said of the ‘V’, which can be found more or less in the centre of the terminator.

Over the course of a few hours, you can actually watch these appear and disappear during the lunar sunrise at that spot.

For more info on this, See http://en.wikipedia.org/wiki/Lunar_X.

Here are the two shapes in closeup… 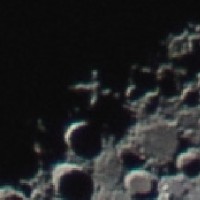 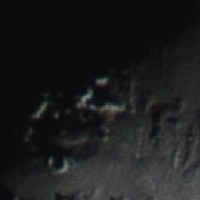