Last night was the first time I had a chance to try the Astronomik CLS light pollution filter I recently received. Overall, my first impressions are excellent! I’m absolutely amazed how much of the light pollution the filter removed in the single sub frames. I am in Canterbury, Kent, and although not the worst light polluted place in the world, it’s still pretty bad, and originally, I thought there was no chance of being able to get any decent images from my back garden.

However, I was most definitely wrong…! The first image below is a single sub-frame from last night’s imaging session. the background glow, compared to anything I’ve had in the past, is greatly reduced. Compare it to the following frame, which is the example of the best frame I got previously.  Both are a similar exposure. As you can clearly see, the difference is massive. There is a clear difference in both background light pollution levels, and in contrast.  The difference was actually far more than I was expecting.  The Horsehead and flame nebulae are much dimmer objects than M31, and I’ve tried to capture them before without the filter.  I’ve never had any luck at all, and have never got anything meaningful.  The first sub frame yesterday blew me away.  There they were, as clear as anything (well, as clear as a single sub-frame will show them anyway!).  The older shot is also noisier, as it was taken on a summer evening if I remember correctly, so the camera was warmer.  These are, of course, single frames, and show what comes out of the camera before any processing has taken place.  When I get a chance, I’ll do some proper side-by-side testing with the same target, on the same night (which has, quite rightly, been requested in the comments…)

Despite not being an EOS clip filter, the T2 CLS filter itself fitted very well between the adapter and the T-Thread of the scope.  The whole setup was very solid once attached, which was something I was a bit concerned about before I set it up.  The pictures below show the filter attached to the EOS T-Thread adapter, then in place on the camera, and finally the whole thing attached to the scope. 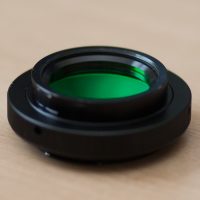 On the EOS T-Thread adapter. 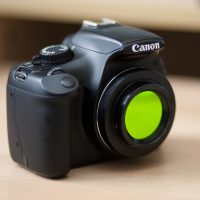 Attached to the front of the camera 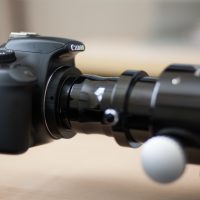 In place on the scope