Skywatcher Mount Power Woes (and a Way to Solve Them!) 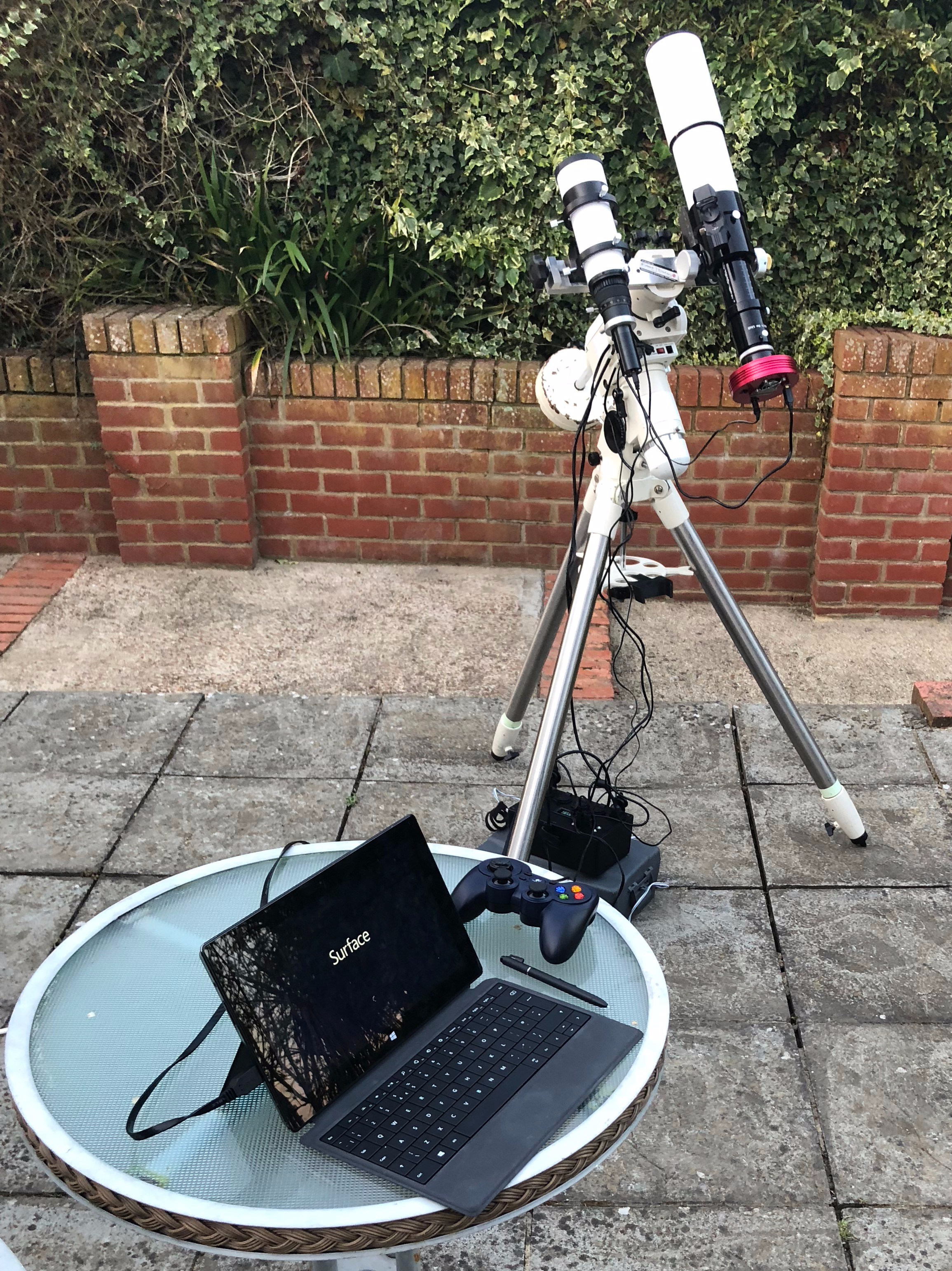 The HEQ5 with ED70 Doublet, Controlled via EQMod on a Microsoft Surface 2 Tablet

For the last couple of years, I’ve had a fair few instances of what I like to call ‘flash gremlins’ with my Skywatcher HEQ5 mount.  Before I start, I’d like to say I absolutely love this mount.  It’s been with me since the start of my deep-sky astro imaging journey back in 2012.  It’s consistently reliable, and when the gears had worn enough that it started not to be, a Rowan belt mod sorted it.  However, there’s one aspect of this, and other Skywatcher mounts (especially the otherwise fantastic AZ-EQ6 that my local Astro society uses), that continues to frustrate, and that’s power.  Basically, skywatcher mounts like power, and plenty of it.  They like to have the full whack of a fully charged battery to perform well – i.e. approxmately 12.5v or higher.  They can, according to the specs in the manual, work on between 11 and 15v, but truth be told, you always need to err towards the upper end of this range.  This is fine when powering from a sufficiently meaty PSU from the mains – I never get any issue when imaging at home and plugged in.  If, though, I decide to go into the field and use a battery, the story is quite different.

When the voltage being supplied to the mount drops below 12v, then you get the ominious ‘slow flash’ of the power light.   Batteries generally supply a highwer voltage when the current they have to supply is lower – i.e. if you only have one thing running on the battery, and as long as it’s not on its last legs, then you may be fine.  However, as soon as you ramp up the Amps being drawn, the voltage the battery can sustain generally drops, which can easily take it below this 12v threshold.  When you get the ‘flash’, the symptoms include issues with GoTo accuracy, issues when guiding, and general gremlins sneaking into the mix.   Some sessions can survive a whole night with the slow flash, whereas in others, the mount won’t play ball no matter what you do.  This has resulted in me toften tearing some of the little hair I have left out trying to sort the issue, or redistribute the power load somewhat to give the mount a higher share of the one battery.

I have precious little time to image as it is, with a good portion of it being eaten up with troubleshooting these sorts of issues.  I recently decided enough was enough, and decided to figure out a way to sort this once and for all.  The rules of the electricity gods state the the more voltage you supply, the fewer Amps the mount will need to draw.  In a nutshell there are two ways of doing this….

I can safely say that both of these work well.  The first method was that chosen by a member of the Astro society to boost the power to the society AZ-EQ6.  Two of the batteries in the observatory were wired in series in order to up the output volatge to 24V.  This was then stepped down to approximately 14.5V, and now the mount has no power issues to speak of.  Job done!

However, due to the fact that humping two lead acid batteries is a little impractical for a mobile setup, I decided to investgate going the other way, and get more out of my single power source (a 67Ah AGM leisure battery).  On testing, this was actually dropping to 11.4V or so when slewing in both axes, and generally dropping from a high of about 12.5V to around 11.8V in about 30 mins when tracking/guiding.  The flash gremlins thrive in these conditions… 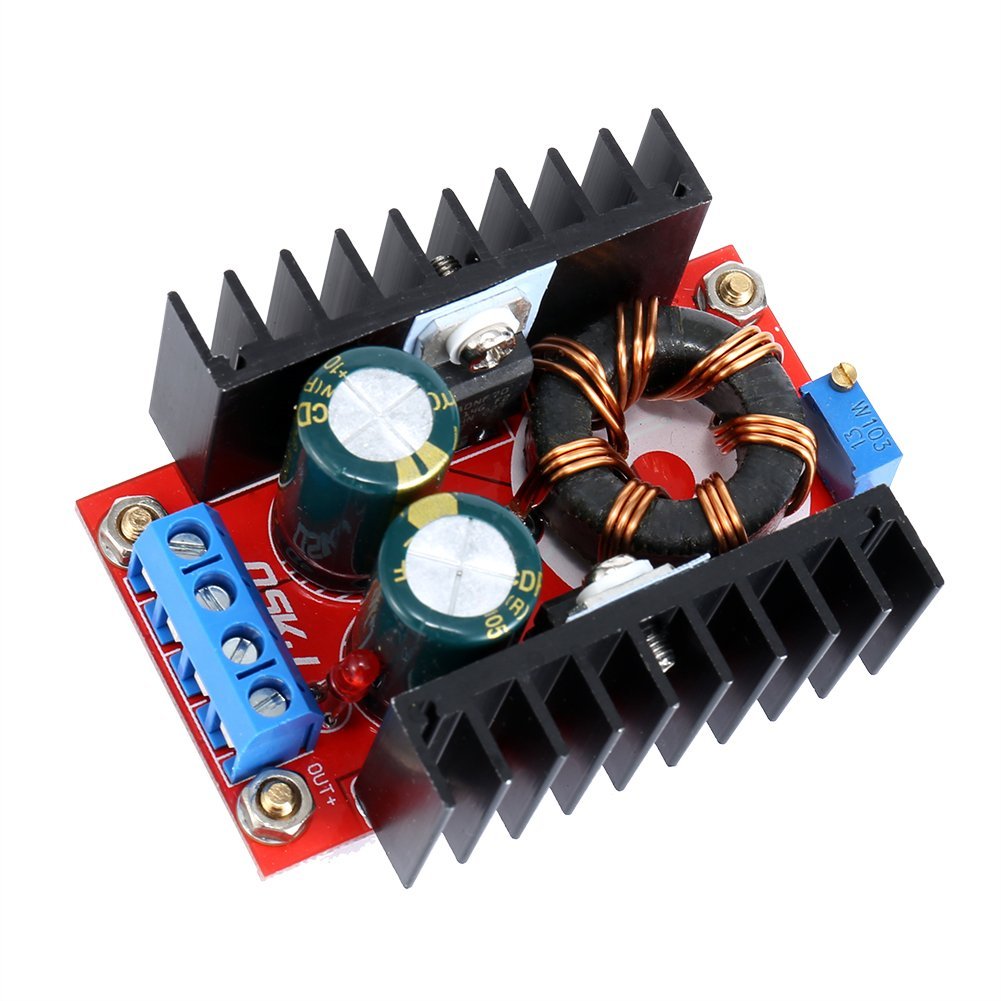 On investigation, I managed to get hold of a step-up circuit for just under £7 from good old Amazon.   The link to the one I got is currently http://amzn.eu/8O53fbW, but depending on when you’re reading this, that link could have expired.  A quick search for DC-DC 150W Power Supply should bring up something similar.  The same units are also available all over ebay, but generally ship from Hong Kong, and with a spell of clear skies coming up, I wanted it double quick!  These little bundles of circuiry basically take an input voltage of anything between 10 and 32V, and will output anything from 12V-35V.  Basically, the output voltage needs to be approximately 2V or more higher than the input volatge.   The bigger the difference between the input and output volatges, the hotter the circuit will get, and if you’re boosting over about 30% of the potential capacity, then you need to install a fan to keep the whole lot cool enough. 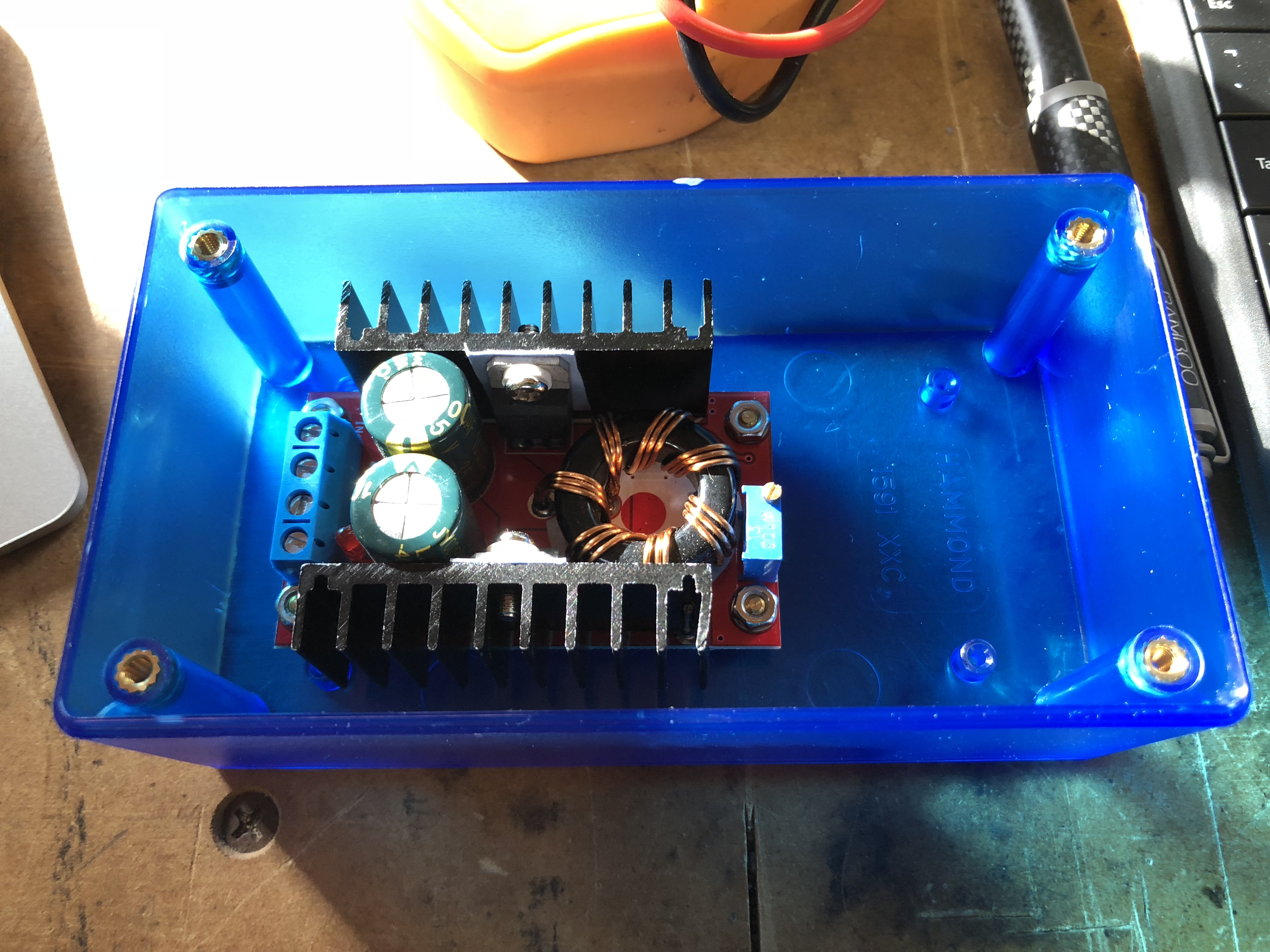 Luckily, my meagre boost of a few Volts from 11-12ish to around 14-15ish meant that this wasnt necessary.  I mounted the whole thing inside a small project box (dontcha love the transcent blueness of it!).  This particulr board has four M3 (I believe!) mounting risers installed which I used to do this.  In order to keep an close eye on the Voltage being supplied and the amps being drawn on the output, I installed a cheap panel-mount Volt/Ammeter.  This is more because I really dont want to over-Volt the mount and blow it to kingdom come, and so the Voltmeter allows me to keep an eye on this. 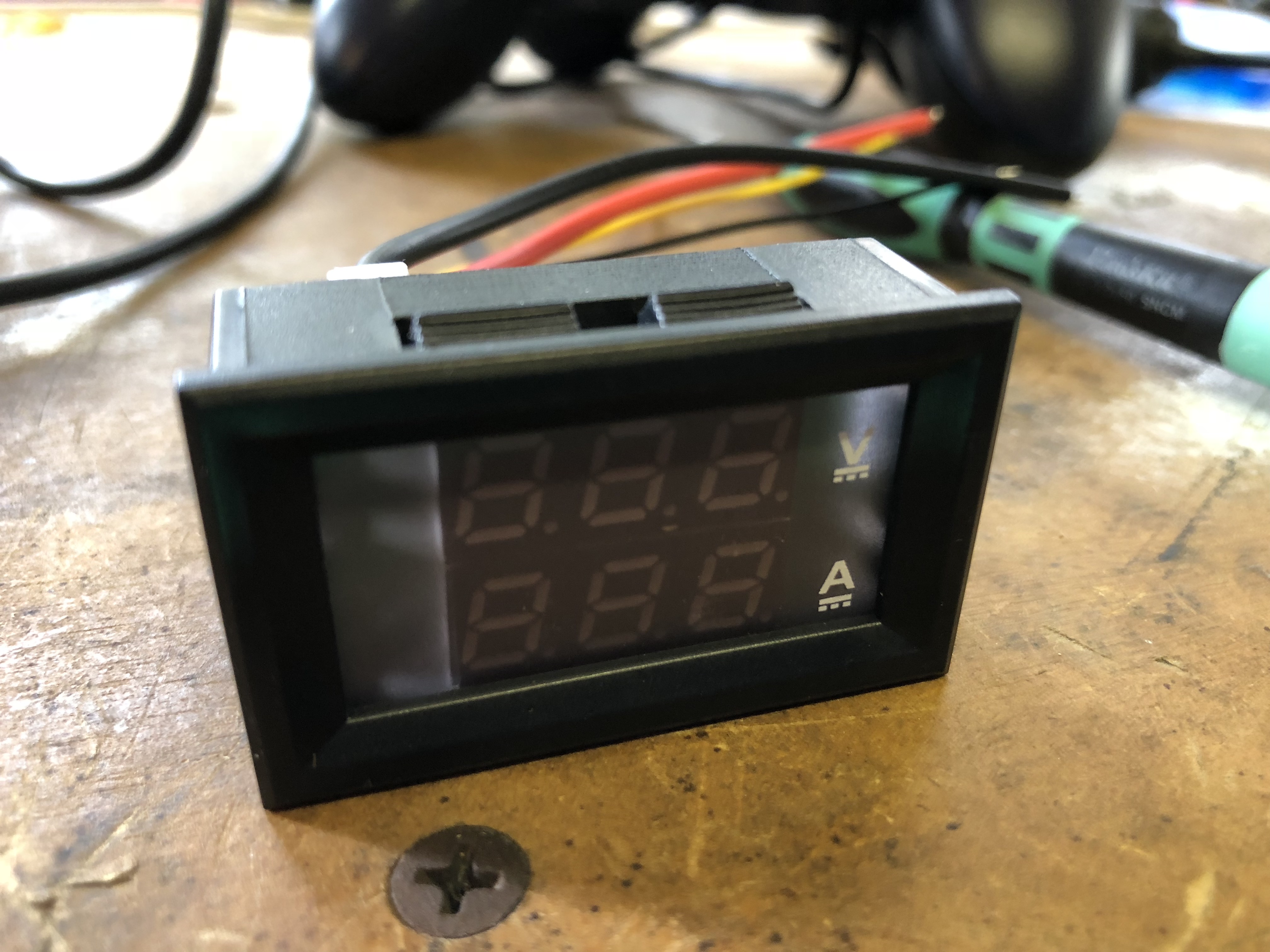 The Ammeter allows me to see the Amps being drawn by the mount at any time.  The input to the power converter box is a 2.1mm power jack – the same used by the mount itself.  Using this means I can supply the power with the same 12v utility socket lead I use to power the mount directly.

The business end of the box sports a 12V utility/car lighter socket, and this allows another mount lead to be used on the output end.  I’m trying to keep leads as standard as possible, so it’d be quick to replace with one of the many spares I’ve collected over the years if something goes amiss.

To finish off, and before connecting to the mount, a small pot on the circuit needs to be tweaked to get the output Voltage correct.  I set this to 14.8V, to give a small margin for error, but still plenty of nice juicy Volts to keep the mount happy.  I did some testing, and took the Voltage on the input right down to 10V, and the output Voltage level stayed absolutely rock solid, but with a predicted effect on the amps being drawn from the input source. 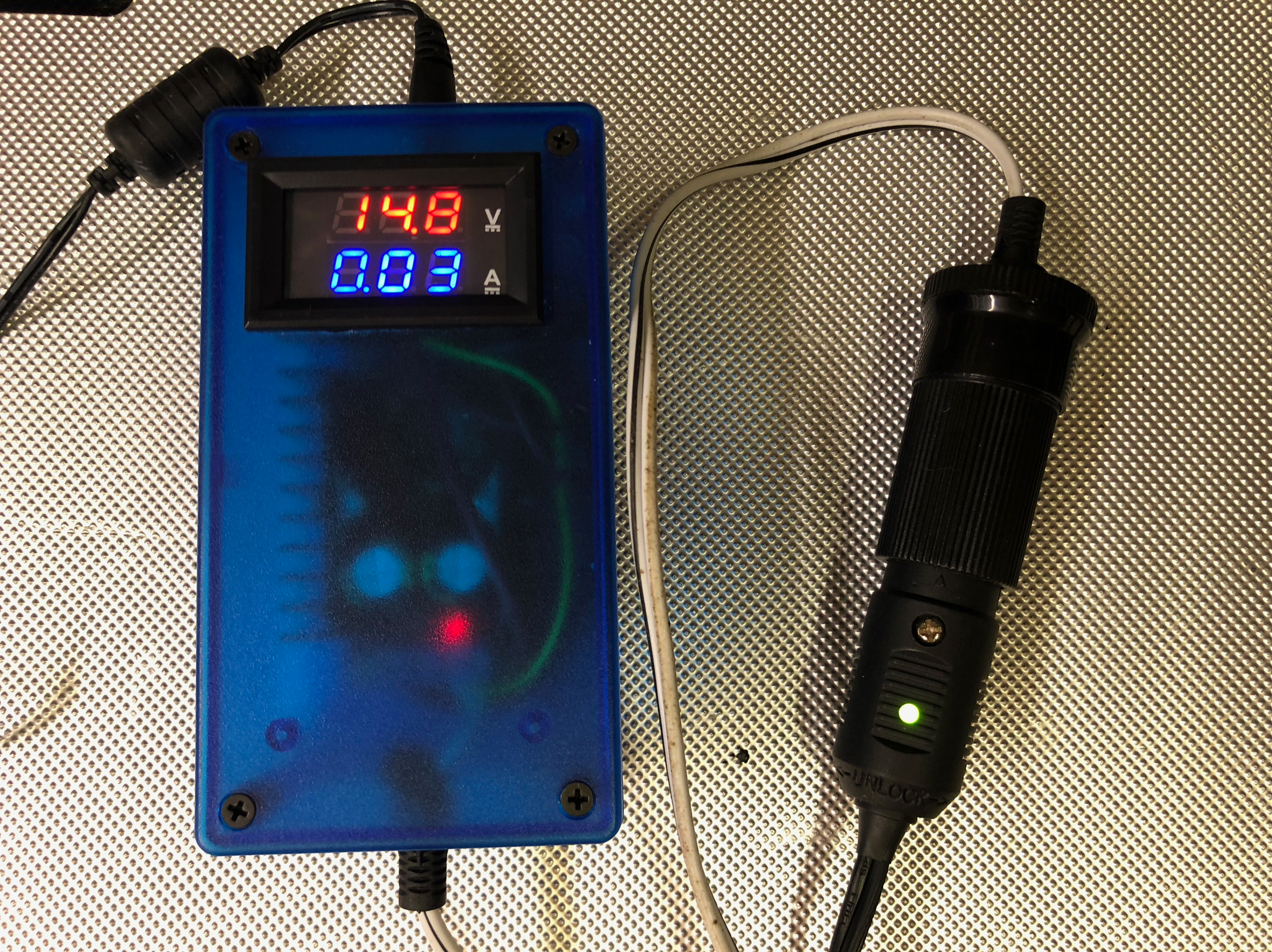 Generally, my battery supplies between 11.8V and 12.2V.  The lower the input volage, the more amps need to be drawn on the input to keep the voltage on the output up. 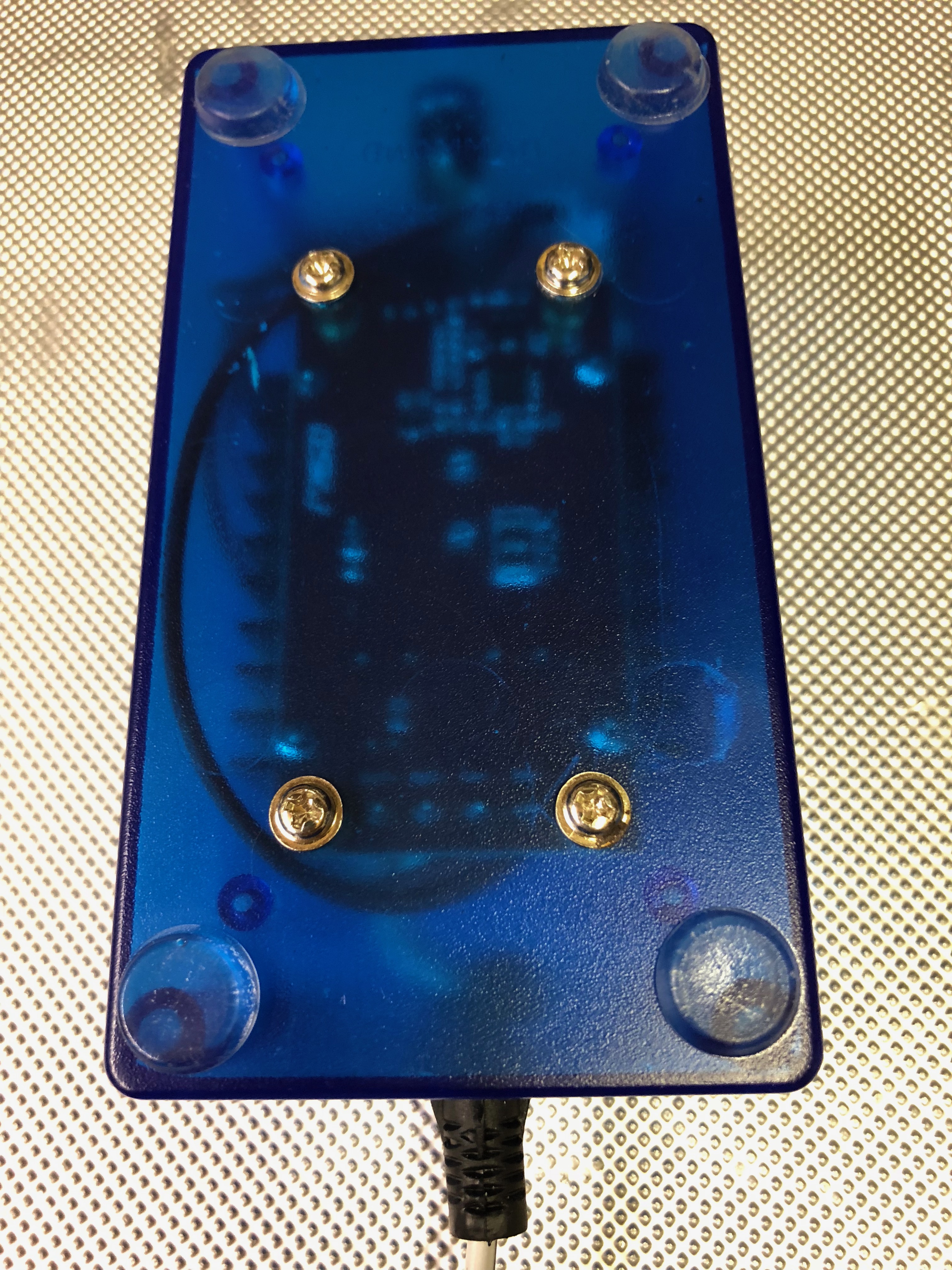 What I was interested in was the difference in the Amps being drawn from the power source when supplying the mount with 11.8-12.2V directly, and when supplying the mount 14.8V via the new box.  I have a volt/ammeter on the power splitter box I use to supply the input, so could see what the whole lot was drawing.  Turns out the difference was fairly minimal in the big scheme of things.  When supplying via the step-up box, the mount would take about 0.25A (250mA) more when slewing at full speed in both Axes than when being supplied directly.  That’s a surefire win in my book!  When simply tracking, the difference was just 0.13A.   All this time, the voltage being output stayed absolutely steady.

And the flashing?  Consigned to the dustbin of gremlin history hopefully.  Certainly absolutely no sign of it during testing and subsequent first light use.

The jury is out on the long-term stability, but I currently have absolutely no reason to think that there will be any issues.  Here’s hoping!

I can happily confirm that after several sessions, the power box has performed admirably.  An 8-hour session out in the field, and several at home, and I haven’t had a single return of the flash gremlins.  I think I can safely say I can put this little issue to bed…